Whether it’s writing, designing or even performing, your public can make or break you. They are the people who you’re doing it for, who pay for you, provide you with a future. But your public consists of very different kinds of people who aren’t the same at all. That’s why personas were created: imaginary characters with specific behavior, needs and wishes who represent parts of your audience. And news organizations actually can’t live without them.

Personas come in handy when you’re getting to know your audience, but also when you want to reach out to them. After establishing the ‘hard facts’ about your target group, the next step is narrowing the group down. We’ve spoken about various ways to do that in a previous article, and creating a persona is one of the most used and most valuable ones. Not only because it allows you to get inside your reader’s head, but also because it’s a very time-saving tool.

‘People between the 18-55 that read a lot’ is basically nothing to work with, because you don’t know anything valuable about them. You want to know what they’re feeling, how they are living and why they do what they do. According to Professor Robert G. Picard, senior research fellow at Reuters Institute and the University of Oxford – who we have interviewed previously about audience and membership, every news or media organization needs at least one persona, preferably even more. “Personas in news organizations are very valuable because you need to know your reader’s interests, views and surroundings. I also believe they need more than one, because for different types of coverage, you need different types of personas.”

What is a persona?

Making personas is basically the same as creating characters for a movie: they need basics like a name, age, residence and an appearance. But they also need a personality: give them characteristics, a job, some hobbies, a backstory. Then you’ll need to really get into their heads and think about things that they would like, hate or care about. Do they have specific wishes or goals to reach in life? What are the things they are frustrated with and what are things that make them happy? Implement things about your own workfield into it, like other competing businesses they would like or other newspapers they would read. Why would you be important to them in their eyes? When you’re done with this, you basically have your persona. A simple example is Hackastory’s own Justin. 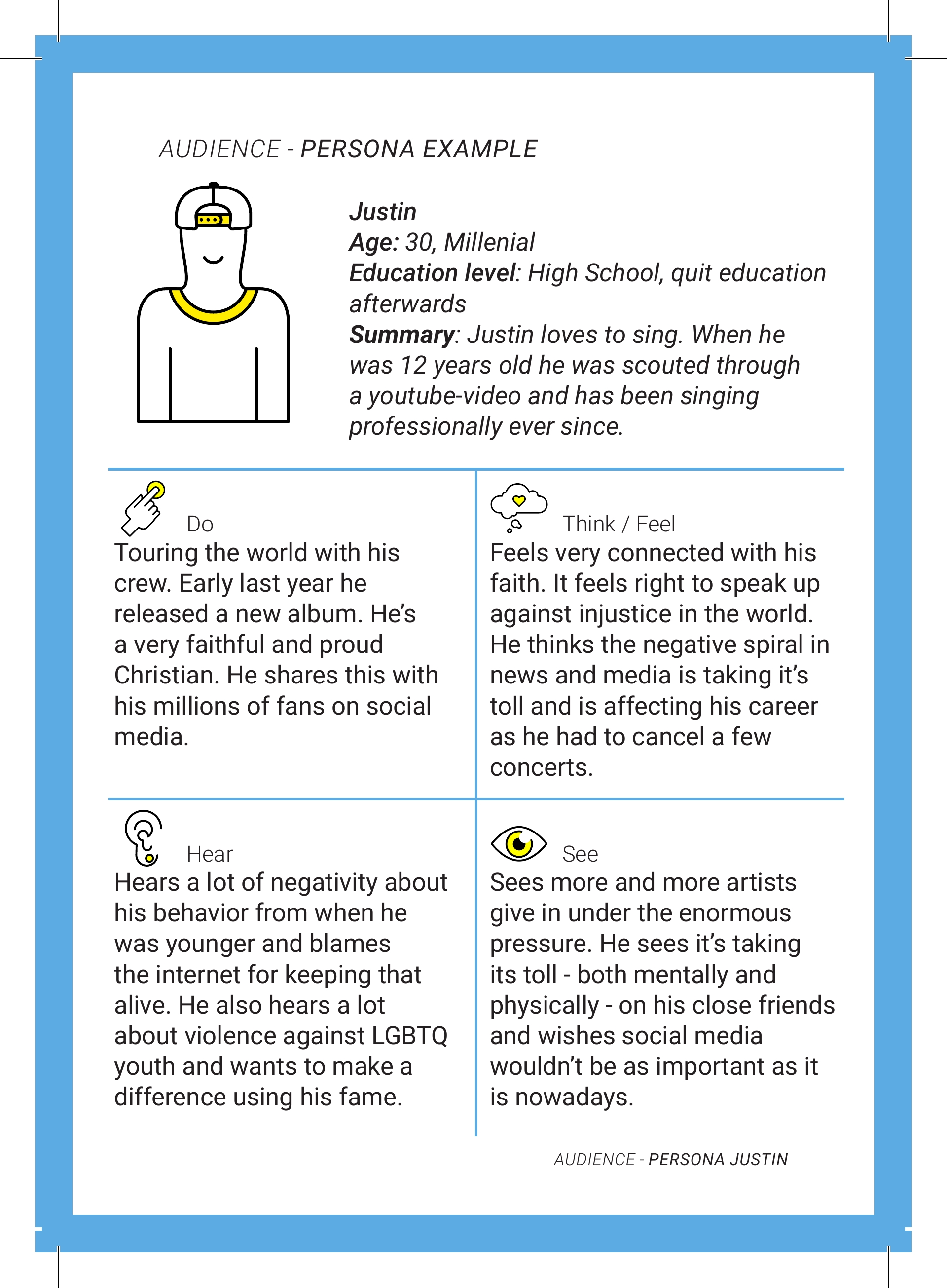 The best thing is, everything you need to know about (this part of) your audience is put together in one clear overview, so you never have to search for particular motivations or things potential users would like again. This makes personas incredibly efficient: it’s a time-saving, user centered research method. Besides, when there’s a disagreement regarding something your company is planning to do or make, you can always fall back on the personas and base your decision on the model.

However, in Picard’s eyes, news organizations need more than one persona, because they deal with different kinds of news and themes. “It’s interesting to look at the way magazines work with multiple personas, because there’s never one magazine that covers everything. Take women’s glossies: there are mostly up to ten of them that are build on the same foundations but offer different things, which still makes them unique. Those magazines are separating themselves by writing stories for three or more personas and by constantly asking themselves: what would be the difference? When they’ve got ten articles to choose from, they test them all against the personas they have. So maybe three articles match persona one, four match persona two, two match persona three and then the tenth article matches none of them – which means it has to change to fit in. This way, everything you publish will be of value to everyone of your audience.”

What makes personas so valuable, is the fact they require you to put yourself into the head of your users. During the creation, you basically ‘become’ your audience, which is far more effective than just describing them or talking about them. You can generate content that really adapts to your individual user’s wishes and views. Picard emphasized this by stating that being exclusive and special is the only real way to being successful nowadays. “You have to target individual’s wishes. Get them something they can’t get anywhere else. As much as you’d want to, you simply can’t relate to everybody equally. That’s why most people don’t read newspapers: they’re just not relevant for everyone. If you’ve got engaged readers and know what they want and who they are, you know who you are talking to and you know what content to make. Only then, you’re valuable.”

Robert Picard: “a subscription model is not the silver bullet”