Saving journalism: 20% of your readers solve 80% of your problems

The majority of journalists work their asses off. Why? “We’ve got so many things to report on and need to cover, because not all of our readers are interested in the same things”, is one of the reasons we often hear. But do you really need to cover all of it and satisfy all of your readers? It might be an idea to take a different look on that…

In modern journalism, there’s always a division when it comes to your audience. There will always be a group that is significantly less enthusiastic about your product than the other ones. They simply don’t value the given product as much as others or use it in such a way that the product can easily be replaced or forgotten. They will still use your product, but are less likely to pay for it. These people mostly cover up to 70 or 80% of your audience.

On the other hand, there is a group that does want to pay for your product or service and has trust in you. These people are the heart of your business and they are the ones that keep coming back for more. Sadly, they (mostly) only cover 20% of your whole audience. This is because of the 80/20 rule. Or the Pareto principle. Or the Law of Vital Few (it’s all the same, you get it).

For example, Ken Doctor, author of Newsonomics and longtime watcher of the business side of digital news, stated in 2010 that the rule dominated the newspaper formula but doesn’t anymore. “They [newspapers] long used one of the many 80/20 rules out there: 80% of their revenue came from advertising, and 20% came from circulation. Now, as ad revenue has been on a precipitous decline — down from almost $50 billion in 2000 to $24 billion in 2009, and still sliding a bit more — that old formula is out the window.”

What does this mean for you?

Because of this rule, it’s important to focus your efforts on the 20% that does want to invest in your business and does want you to survive. They’re not only more likely to become members, they also might be the people who eventually want to engage and be part of your community. They’re the ones that we want!

The other 80%, the ‘passive’ readers, could be a massive pain in the ass, as they simply ignore your quest for a sustainable business: they will visit your site, app or Facebook page and they will read your articles, but they won’t ever want to pay for it. And that’s fine, because in the end, they don’t matter that much for you.

To make things more visual, the figure below shows how engagement works in media. This pyramid from Mike Dicks, former director of digital consultancy company BleedinEdge, gives you more insight into the rule: there is a division of 5% producers, 20% players and 75% passives. Dicks expects that roughly 20% of the audience will engage in the content compared to 75% that will sit back. This also applies to journalism: you can see the passives as your readers who probably won’t engage enough to pay for your service, the players as the people who are willing to pay but might need some persuasion and the producers as your biggest fans, who want you to succeed and want to engage with you. The producers and the players together make up for your core audience (25% in this case). They can make the difference. 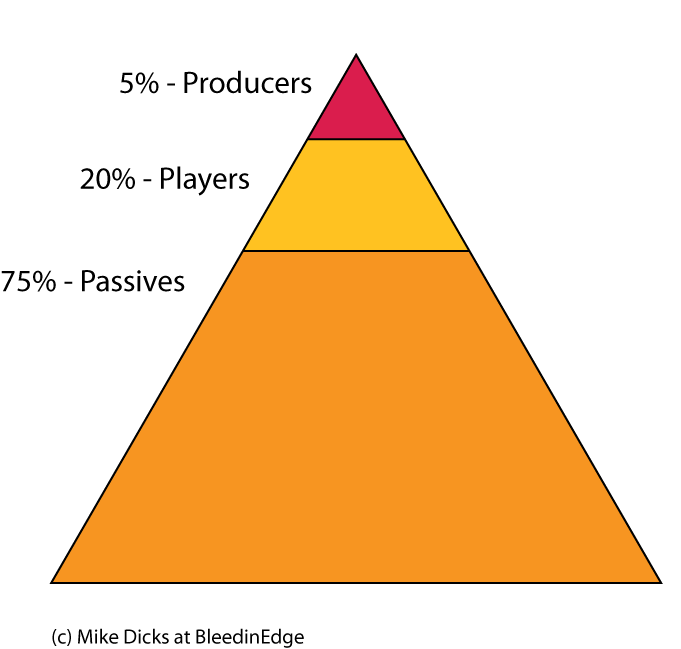 The question stays: how do you figure out who that particular 20% (or 80%) is? Well, you could start with the tools we gave you in the previous article, so you get to know your audience through and through. After that, spotting the passives and the payers is still a difficult task, but there are ways to do it. Maybe you won’t find all the segments within the 80% of people that don’t want to pay, but that’s not a disaster. After all, if you want to narrow down your audience more, you can conduct a survey or speak to people and ask them – in the hope that it will generate honest answers. If you keep doing this, the magical 20/80 division might appear, which means you can start getting your payers on board.

The ultimate crash course in verification for journalists